All the information for a backtest is displayed in the Trades Statistics tab where you can find the statistics on how your cBot performed and how much of your money was at risk. 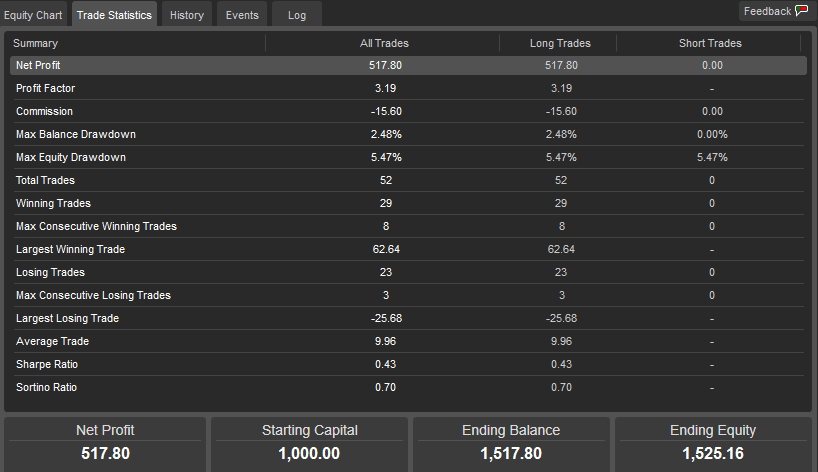 Many traders who run a backtest do not understand what the actual statistics mean and how to interpret them, below is a description of each one, and the most important statistics are highlighted.

This is the realised profit after all trades have closed, the Net profit would be the actual money you have won, but does not include any trades still running that would be at a loss. If your Net profit was £500 and you had a trade open with a loss of £50 and if you close this position your total net Profit would be £450.00

When using Forex most brokers charge a commission as well as the Bid/Ask spread to allow the trader to enter a trade, this value is the total amount of commission that was charged for all the trades that were executed.

This value is very important as it shows how much of your original account balance was at risk as a percentage at any time during the trading dates of the backtest.

This value is also very important as it shows how much of your account equity was at risk at any time as a percentage during the trading dates of the backtest.

This shows the total number of both buy and sell trades that were submitted and closed during the backtest, this does not include existing open trades that have not closed.

This is the total number of winning trades which have closed in profit.

This is the total number of winning trades that were closed one after the other with no losing trades.

During the backtest start and end dates, this will show the amount of the largest winning trade that closed at a profit.

This is the total number of losing trades which have closed with a loss.

This is the total number of losing trades that were closed one after the other with no winning trades.

During the backtest start and end dates, this will show the amount of the largest losing trade that closed at a loss.

This will show the calculated average value of the profit or loss for all trades that closed.

The Sharpe ratio term is used by trading platforms as a measure of the Return of Investment (ROI) compared to the risk. The ratio is the average return earned in excess of the risk-free rate per unit of volatility or total risk.

The Sortino ratio is an alternative to the Sharpe ratio which uses downward deviation in place of standard deviation.

Why is my ending equity different from my ending balance?

If you had an ending equity of £2000.00 with an ending balance of £1000.00, this means that when the backtest finished there were still open positions that had not yet closed worth £1000.

The same would have if you had open positions at a loss your ending equity would be less than your ending balance.