The Butterfly formation is an extension pattern that forms part of the group of Harmonic  patterns that use Fibonacci numbers. It is a reversal pattern that can usually be found at the end of a trend move and the formation consists of five legs marked X, A, B, C, and D. This type of indicator will help you identify when the current price move is approaching its end which will tell you to enter the market as the price reverses direction.

Forex Traders can use the Butterfly pattern to pinpoint the end of a trending move and in Elliott wave terms you will see this pattern during the last wave (5) of the impulse sequence. The Butterfly pattern has four price swings or legs, you will find that its appearance on the chart matches the letter M with a downtrend and a letter W with an uptrend. While the pattern is forming it is can sometimes be mistaken for a Double Top or Double Bottom pattern.

This is the initial move that forms that pattern and no special rules are required, but with the bearish pattern, you will see the first leg forms when the price falls sharply from point X to point A.

When the A-B leg is formed it will see the price change direction and retrace to 78.6% of the distance covered by the X-A leg. Point B is the most important level for the butterfly pattern for the retracement of 78.6%.

When the B-C leg is formed it will see the price change direction again and moves back down, the BC move should take the 38.2% or the 88.6% retracement of the AB move.

The perfect butterfly pattern should have the following key elements shown below:

How to Trade using the Harmonic Butterfly Pattern?

When leg D is formed the pattern is complete and ready to use for trading. The image below shows a bullish butterfly pattern which has formed and at point D the price has a high probability of turning bullish and going up. The opposite would be the same for a Bearish butterfly pattern. 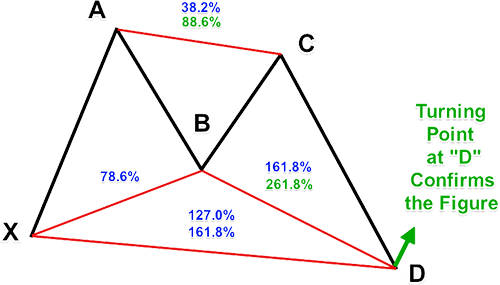 The image below shows a perfect trade setup using the Harmonic Pattern Recognition software for the bearish butterfly pattern, a short position would be opened with stops above the 0% level of the Fibonacci Retracement Tool and the 1st profit target will be at the golden ratio of 61.8%, followed by target 2 at 100% retracement. 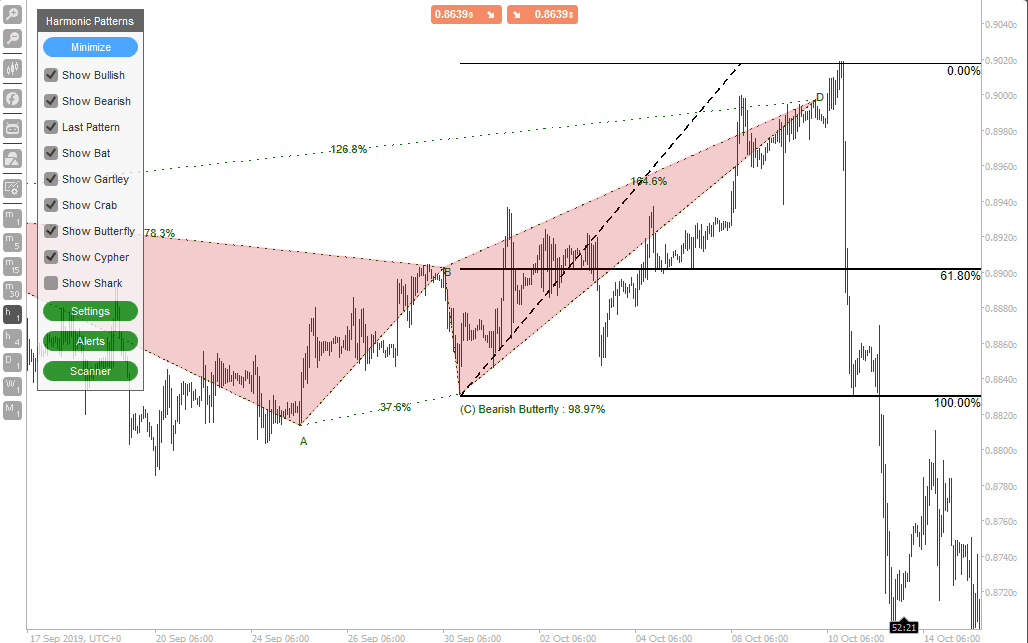 This example is not a perfect Butterfly pattern but uses an accuracy of 98.97% of the Harmonic Pattern Detector